NSPCL which manages the captive power plants at Rourkela, Durgapur and Bhilai with a  combined capacity of 314 megawatts (MW) has been in profit ever since its formation in 2001. The company registered profit after tax of Rs 30.67 crore in 2005-06. It has been distributing dividend continuously for the last five years  and  has paid a total dividend of Rs  77 crore since 2001-02. The operational parameters of NSPCL is of high standards with the Plant Load Factor (PLF) of the plants  in the range of 85-93% which is much above the national average. The company is presently executing a major capacity enhancement plan. This includes   2X 250 MW Thermal power plants being set up at an estimated project cost of Rs 2,500 crore at Bhilai.

On the occasion, Mr. S.K. Roongta, Chairman, SAIL appreciated the excellent performance of the SAIL-NTPC JV company since its formation and said “NSPCL will set a new standard in the working of power plants ”.

The other Power JV of SAIL, Bokaro Power Supply Company Pvt. Ltd. (BPSCL), a 50:50 joint venture with Damodar Valley Corporation (DVC), which manages the captive power plant at Bokaro Steel Plant having a rated capacity of 302 MW, has been in profit ever since its formation in 2002. 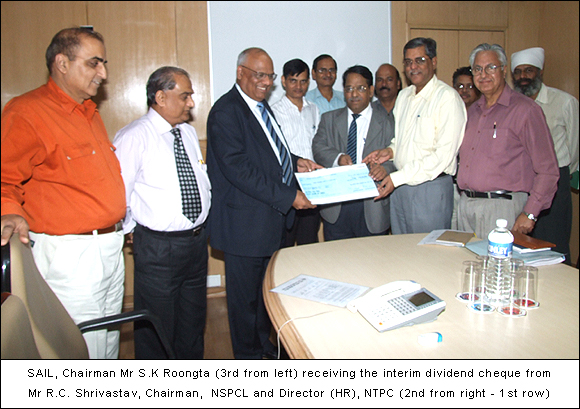