In a significant move which will bring about socio-economic development of the backward areas of Bastar region predominantly inhabited by tribal population in Chhattisgarh state and further the industrial progress and mining activities in the region, Indian Railways have taken a momentous step to expand the reach of its network in this backward area meeting the long pending demand of the local populace. In a shining example of Public-Public Partnership, Ministry of Railways, Steel Authority of India Limited (SAIL), National Minerals Development Corporation (NMDC) and State Government of Chhattisgarh have come together to construct a 235 kilometer new broad gauge railway line from DalliRajhara to Jagdalpur via Rowghat in Chhattisgarh.

A Memorandum of Understanding (MOU) in this regard was signed today among these four agencies in the presence of the Union Minister of Railways Shri Lalu Prasad, Union Minister of Chemical & Fertilizers and Steel Shri Ram Vilas Paswan, Chief Minister of Chhattisgarh, Dr. Raman Singh and Minister of State for Railways Shri R.Velu. The signatories to the agreement included Shri K.C. Jena, Chairman Railway Board; Shri Shivraj Singh, Chief Secretary, Government of Chhattisgarh; Shri S.K. Roongta, Chairman, SAIL; and Shri Rana Som, Chairman and MD, NMDC. Senior officials of Ministry of Railways, Ministry of Chemical & Fertilizers, SAIL and NMDC were among those present on the occasion.

Speaking on the occasion, the Union Railway Minister Shri Lalu Prasad said that this new railway line is an important project which will help to accelerate economic development in the country. Shri Lalu Prasad said that the railway line will pass through iron ore rich regions of Beladila and Rowghat, which will lead to the increase in the steel production in the country. The Minister pointed out that the new line will also facilitate the bulk transportation of forest products, in addition to transportation of ores and minerals.  The new line will provide lot of employment opportunities to tribal and backward classes people and will lead to development of backward areas of Bastar, Narayanpur in Chhattisgarh, the Railway Minister added. Referring to the earlier MOU signed in 1998, Shri Lalu Prasad said that the project could not take off during the last decade due to some reasons. The Minister informed that the issue was resolved in a special meeting convened by his Ministry last month involving all the concerned agencies which paved the way for today’s revised Memorandum of Understanding.

In his address, Shri Ram Vilas Paswan, Union Minister for Chemical & Fertilizers said that this new railway line will meet the long pending demand of the local people. He also pointed out that today’s MOU symbolizes best example of Public-Public partnership. He said that it is appreciating that Railway Ministry is continuing the concept of developing backward areas in the country. He said that the Public sector in the country is performing with efficiency and called upon them to spend a certain percentage of their profit to meet what is known as Corporate Social Responsibility.

In his welcome address, Shri K.C. Jena, Chairman, Railway Board said that there has been a huge turnaround of Indian Railways due to special initiatives taken by the Railway Minister. He said that the present MOU is a part of this initiative. He said that with the signing of this MOU, a new era will be heralded in the easy transportation of iron ore and steel in the country and bring about much desired socio-economic development of the tribal Bastar region.

The new railway line will include one tunnel of 460 meter length, 46 Road Under-Bridges, 16 Road Over-Bridges, 42 Major Bridges and 303 minor bridges.

Railway has planned to construct 10 nos. of station initially. Nos. of Passenger Halt will be considered as per the needs of the local people and subsequent developments.

In addition to transportation of ores and minerals, which will form the core activity, forest produces, food grains, etc. of the local region is also proposed to be transported through this railway line. Adequate loading and unloading facilities will be provided to handle these commodities. For transportation of mineral ores like iron, dolomite, bauxite, etc., Railway has planned to run goods trains having 58 nos. of wagon with diesel traction. Provision of additional Private sidings can be considered on specific demands from the Industry. 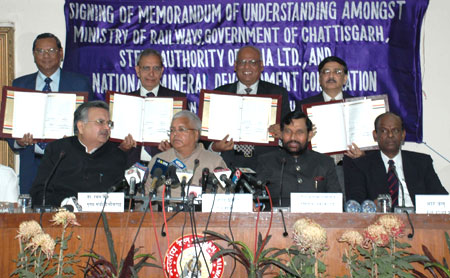