Employees of Steel Authority of India Limited (SAIL) bagged 12 out of 28 Vishwakarma Rashtriya Puraskars-2006 presented by the Union Minister of State for Labour & Employment (Independent Charge), Mr. Oscar Fernandes, at Vigyan Bhawan on 7 th October 2007. The Vishwakarma awards are given every year to workers of industrial undertakings, mines, plantations and docks for their innovative suggestions leading to cost reduction, higher productivity, import substitution, improved efficiency of the organisation, etc.

Out of the 12 groups totalling 51 employees, seven groups are from SAIL's Bhilai Steel Plant, four from Rourkela Steel Plant and one from Bokaro Steel Plant. They won the award in three different categories -- three groups each under classes A and B and six groups under class C. The winners under these classes received cash prizes of Rs. 50,000 for class A, Rs. 25,000 for class B and Rs. 10,000 for class C. In addition to these cash awards, a certificate of merit is also presented to the awardees. 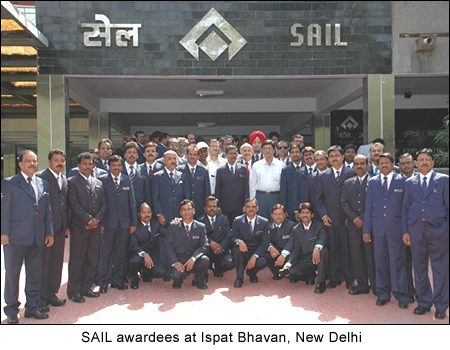