Steel Authority of India Limited (SAIL) has been conferred the Gold Trophy of the ‘SCOPE Award for Excellence and Outstanding Contribution to the Public Sector Management’ in the Institutional Category for the year 2004-05. The award was presented by the Prime Minister of India, Dr Manmohan Singh, to SAIL Chairman Mr S.K. Roongta at a function held at the Parliament Library Building in New Delhi this morning.

SAIL, the largest steel maker of the nation, was one of the leading PSUs that received the award on the occasion. Instituted by the Standing Conference of Public Enterprises (SCOPE), the apex body of public sector organisations, the award aims to reward, recognise and encourage the contribution of public enterprises as well as of outstanding individuals for their vision and leadership qualities in creating national wealth. The five-member jury for the awards was headed by Justice P.N. Bhagwati.

SAIL had earlier bagged the special SCOPE Award in the Turnaround category for achieving a spectacular turnaround in 2003-04.

Today’s award function was held on the occasion of the Conference of Chief Executives of Central Public Sector Enterprises on ‘Empowering Public Sector for Growth’ organised under the auspices of the Department of Public Enterprises and SCOPE. 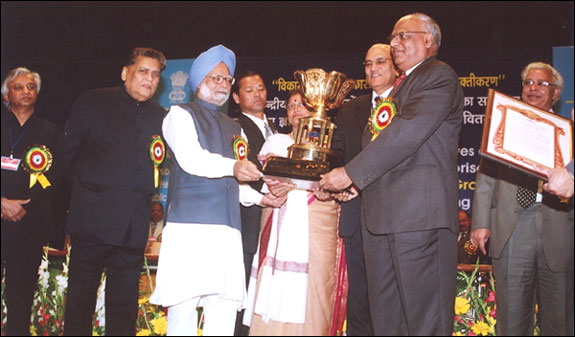