Two players from the SAIL Hockey Academy (SHA) at Rourkela have been selected for the Indian Hockey Junior team which will take part in the International Hockey Challenge Trophy to be held in Singapore from 17th to 21st October, 2007. The countries participating in this tournament are India, Hong Kong, Malaysia, Australia, Pakistan and Singapore.

The two players - Birender Lakra and Jerom Lakra – had joined the SHA in 2004. Birender is the son of Mr. Ignace Lakra, Senior Hospital Assistant at SAIL's Rourkela Steel Plant. Jerom hails from Sundergarh district in Orissa. Birender plays in right-half position while Jerom plays as centre-half. Along with three others from SHA, they were among the 60 players initially selected from across the country for the training camps for the tournament held at Gurgaon and Bhopal.

In the 15 years of its existence, the SAIL Hockey Academy has produced several players of national repute, including Pawal Lakra, Suraj Kanta, K. Sumesh Kanta, Rajesh Lakra, Md. Amir Hayat and Awaish Sanjar. Around 170 young hockey players have received training in the state-of-the-art facilities, including astro-turf, at the SHA till date. Cadets are provided free boarding, lodging, education, medical facilities, sports gear and stipend at the Academy. The majority of cadets passing out from the SHA have got also regular jobs with reputed organisations. 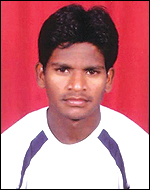